70 years of superb style: the clothes of Queen Elizabeth II

Far from being a passive dresser, the queen pays close attention to what she wears and what those garments convey. She left a lasting mark on the fashion industry, says Justine Picardie.

The Queen has said of herself, “I have to be seen to be believed”, which is why the iconography of what she wears is integral to her enduring success. Her Majesty’s distinctive wardrobe has played a vital role in conveying a powerful visual message, making her instantly recognizable over a lifetime of constant public scrutiny. In doing so, the Queen never followed fashion, but created her own unique style, embodying majesty, modesty, mystery and myth.

All of this took place during a tumultuous time, in which the depiction of royalty evolved from highly controlled portraiture to instant digital imagery, capable of being shared around the world in a fraction of a second. . Yet from the time then-Princess Elizabeth became heir to the throne, upon her uncle’s abdication in 1936, it was clear that her parents understood the importance of restoring a painterly sense of stability. and consistency.

Queen Elizabeth II, wearing jodhpurs and a headscarf, relaxes during the Windsor Horse Show on May 13, 1988 in Windsor, England. (Photo by Anwar Hussein/Getty Images)

Following Edward VIII’s momentous decision to marry twice-divorced Wallis Simpson, the new king and queen would evoke a more traditional era in their clothing choices, both for themselves and their daughters. In contrast to the harsh, modernist chic of Simpson’s clothing by Schiaparelli and other fashionable Parisian couturiers, the young princesses and their mothers wore matching outfits in soft, feminine colors. 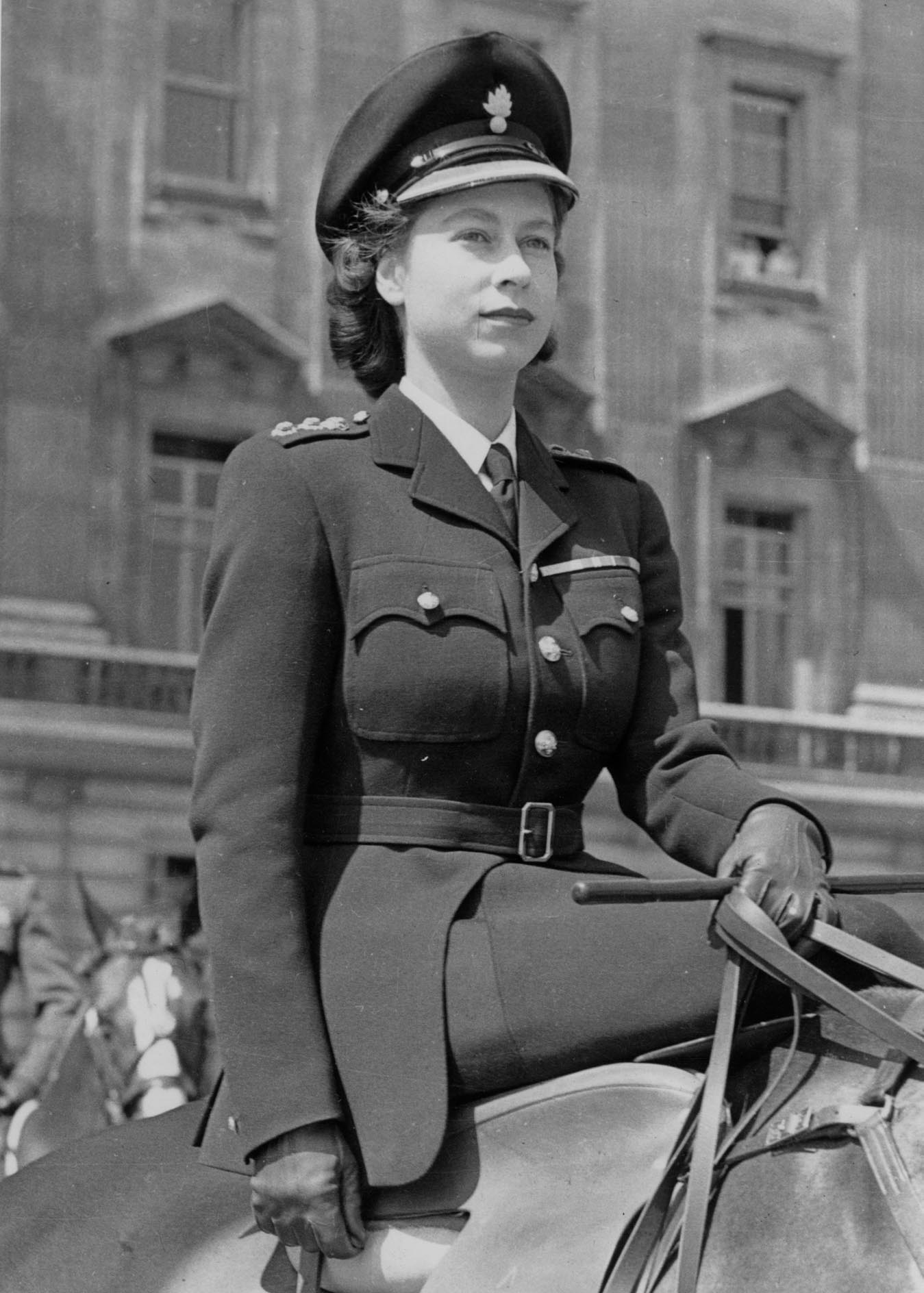 Indeed, George VI specifically asked the Queen’s favorite designer, Norman Hartnell, to conjure up the decorative robes of the royal portraits by 19th-century court artist Franz Xaver Winterhalter. “Her Majesty has made it clear in her calm manner that I should attempt to capture this picturesque grace,” Hartnell wrote in her memoirs, recalling her visit to Buckingham Palace with the King. 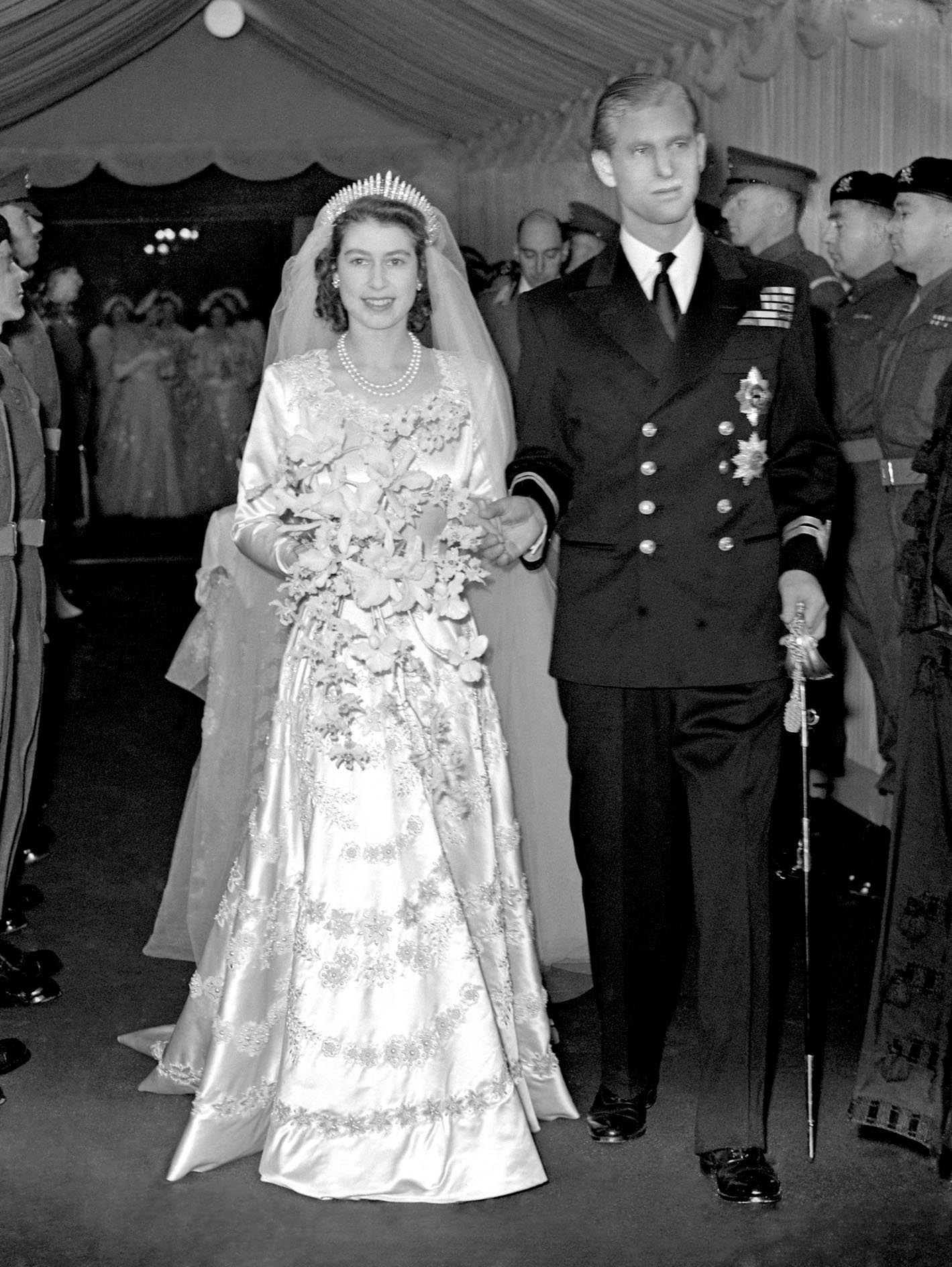 Wedding of Princess Elizabeth and the Duke of Edinburgh at Westminster Abbey.

In the midst of World War II, the royal family continued to have a reassuringly traditional appearance: the dignified king in his military uniform, while his wife and daughters adhered to the same restrictions dictated by clothing rationing as the rest of the country. . The principle of shared duty, throughout the difficult years of national adversity, was underlined when Princess Elizabeth was photographed in her uniform, as a trainee mechanic and driver in the Auxiliary Territorial Service.

Patriotism remained prominent in the design of her wedding dress when she married Prince Philip in November 1947. It was deemed imperative that Hartnell source suitable British fabrics (duchess satin from the Scottish firm of Winterthur , near Dunfermline, with an ivory tulle train made from silk produced at Lullingstone Castle in Kent). After the ugliness of war and lingering austerity, the public’s desire for optimism was reflected in the fairy tale of Princess Elizabeth’s wedding dress, adorned with thousands of pearls and crystal beads and embroidered of a pattern of white roses of York.

The Queen’s coronation robe, also designed by Hartnell, called for equally detailed symbolism and meticulous attention to detail. The plan was to include all the emblems of Her Majesty’s kingdom: the English Tudor rose, the Scottish thistle, the Irish shamrock and the Welsh daffodil. But to Hartnell’s alarm, he was instructed by the higher heraldic authority – the Garter King of Arms – that the correct emblem for Wales was, in fact, a leek. Despite Hartnell’s best attempts to showcase the daffodil’s greater beauty, the garter remained adamant. The stalwart couturier confessed in his memoir to feeling discouraged, but followed his brief nonetheless: “In the end, by using beautiful bristles and sprinkling them with the dew of diamonds, we were able to transform the earthy leek into a vision of Cinderella charm”. ‘ 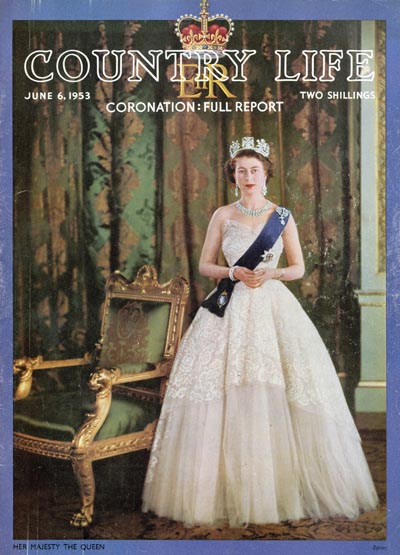 The cover of Country Life with a photograph of Queen Elizabeth II at her coronation.

There was one feature that Hartnell added in secret: a lucky four-leaf clover, embroidered in the middle of the cluster of shamrocks. He later admitted to having done so in the hope that the Queen might “touch this little omen of good fortune”. This [she] did as she finally tried on her sumptuous dress and gently caressed the spreading skirt”.

Hartnell’s stunning designs for The Queen continued to incorporate meaningful designs, which contributed to their magical appeal. Take, for example, the dress she wore in Ottawa for the centennial celebrations of the Confederation of Canada on July 1, 1967: a royal blue skirt and white bodice, with a band of beautifully beaded silver maple leaves ( the national emblem of Canada). It was one of the dresses on display at Buckingham Palace in 2016, in an exhibition of the Queen’s wardrobe, ‘Fashioning a Reign’. Like everything else in this magnificent show, its timelessness is such that it would look as appropriate if worn today as it did half a century ago. 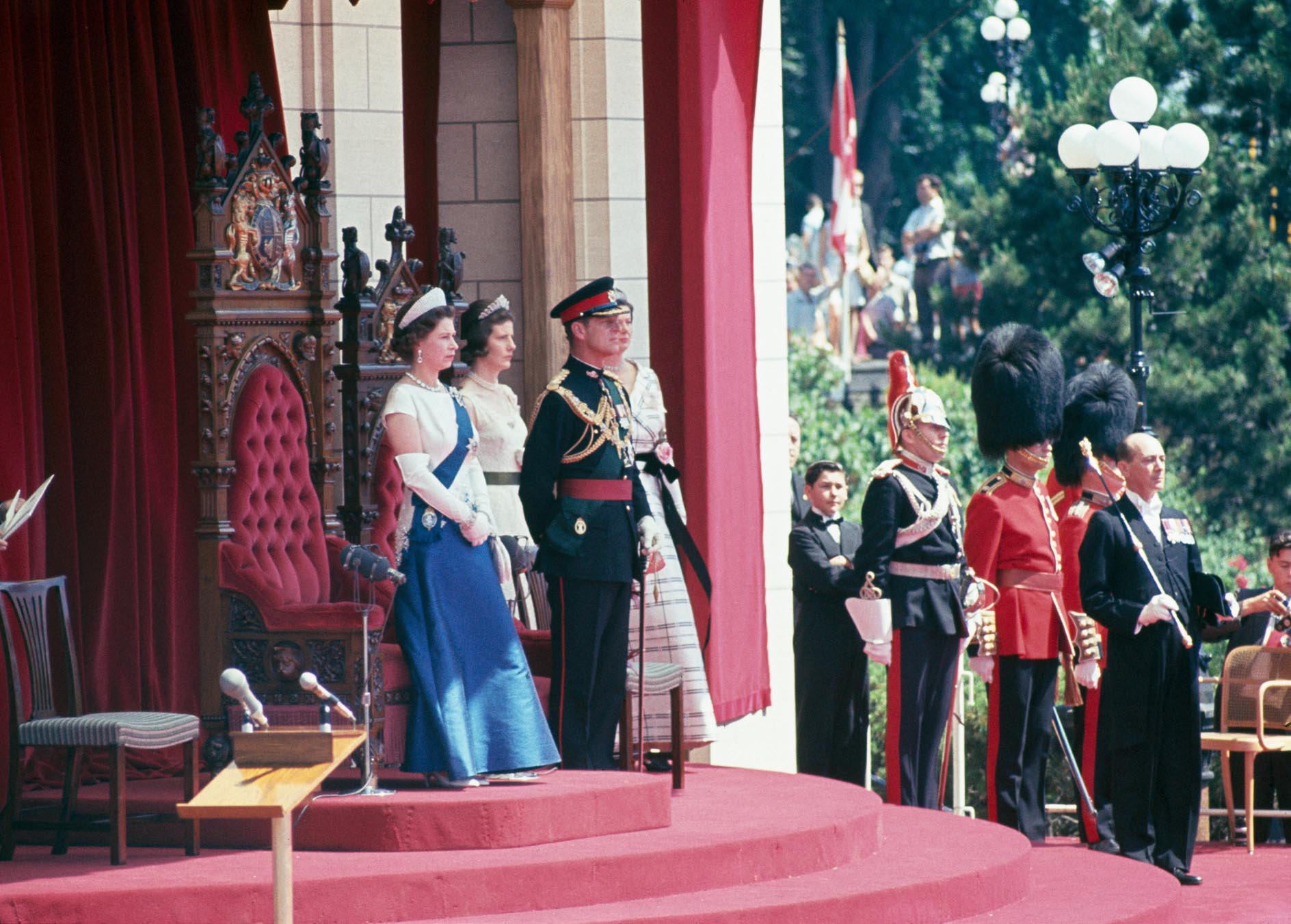 Queen Elizabeth II and Prince Philip at an official reception during their state visit to Canada, June-July 1967. (Photo by Popperfoto via Getty Images/Getty Images)

Also in that show – and just as memorable – was the primrose yellow silk ensemble Hartnell created for the Queen to wear during the Prince of Wales’ investiture at Caernarvon Castle in 1969. The outfit included an embroidered coat pearls at the neckline. and hemline, worn over a sleeveless tunic and matching shift dress of the same material. When I spoke to Caroline de Guitaut, curator of the exhibition (and now sub-surveyor of the Queen’s Works of Art), she expressed my admiration. 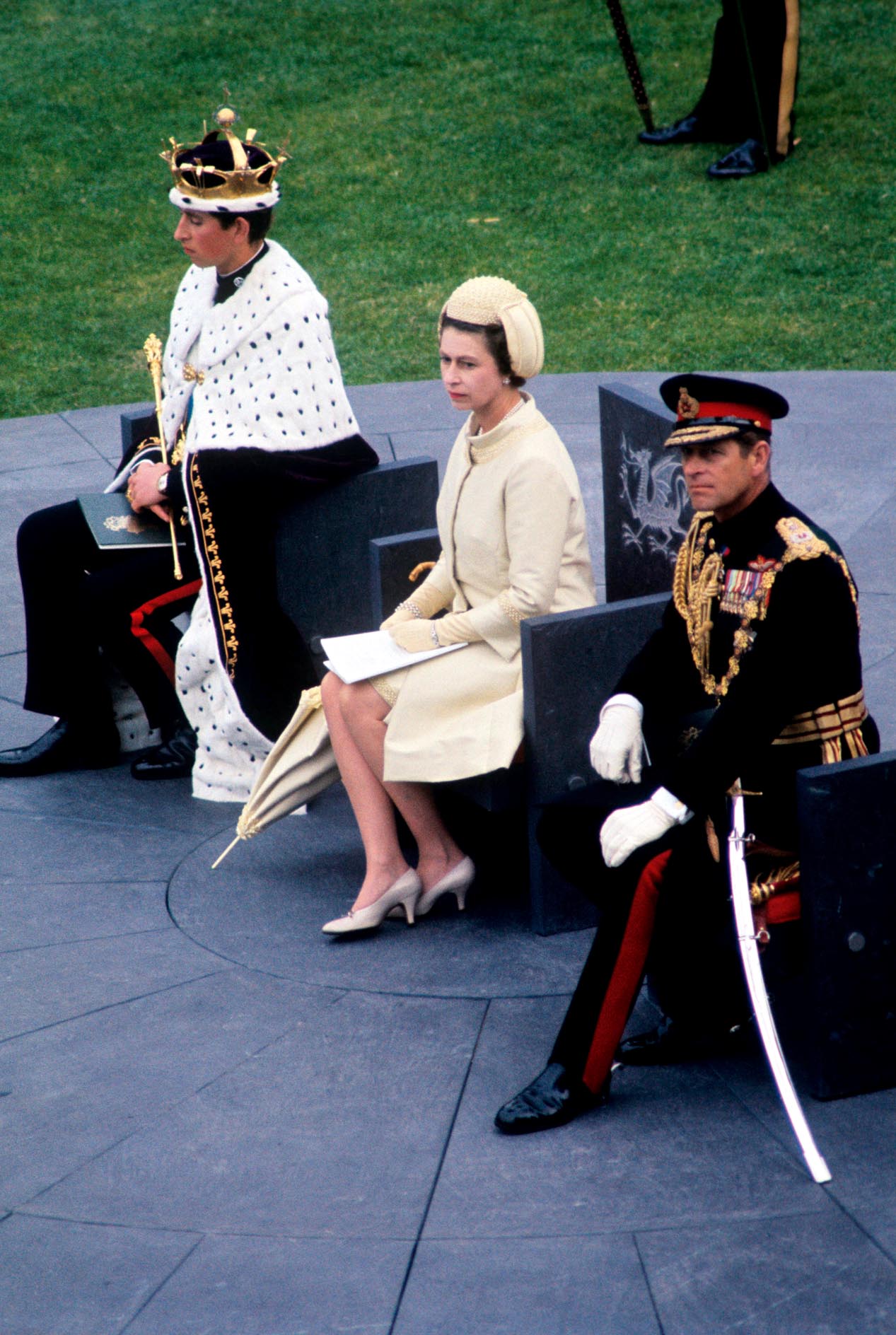 Queen Elizabeth II and the Duke of Edinburgh with the Prince of Wales during his investiture at Caernarfon Castle in 1969.

“It’s beautiful,” she agreed. “The Queen is one of the few people who can wear yellow. These clothes are elegant, but also have to follow protocol – they have to play a part. A global audience of 500 million watched the ceremony on TV and the bold color made the Queen instantly identifiable, as did her striking Tudor-inspired hat, by a favorite milliner, Simone Mirman, in the same yellow silk. The hat showed her face and the discreet layers kept her warm. Thus, pageantry met practicality, on this and every other occasion. 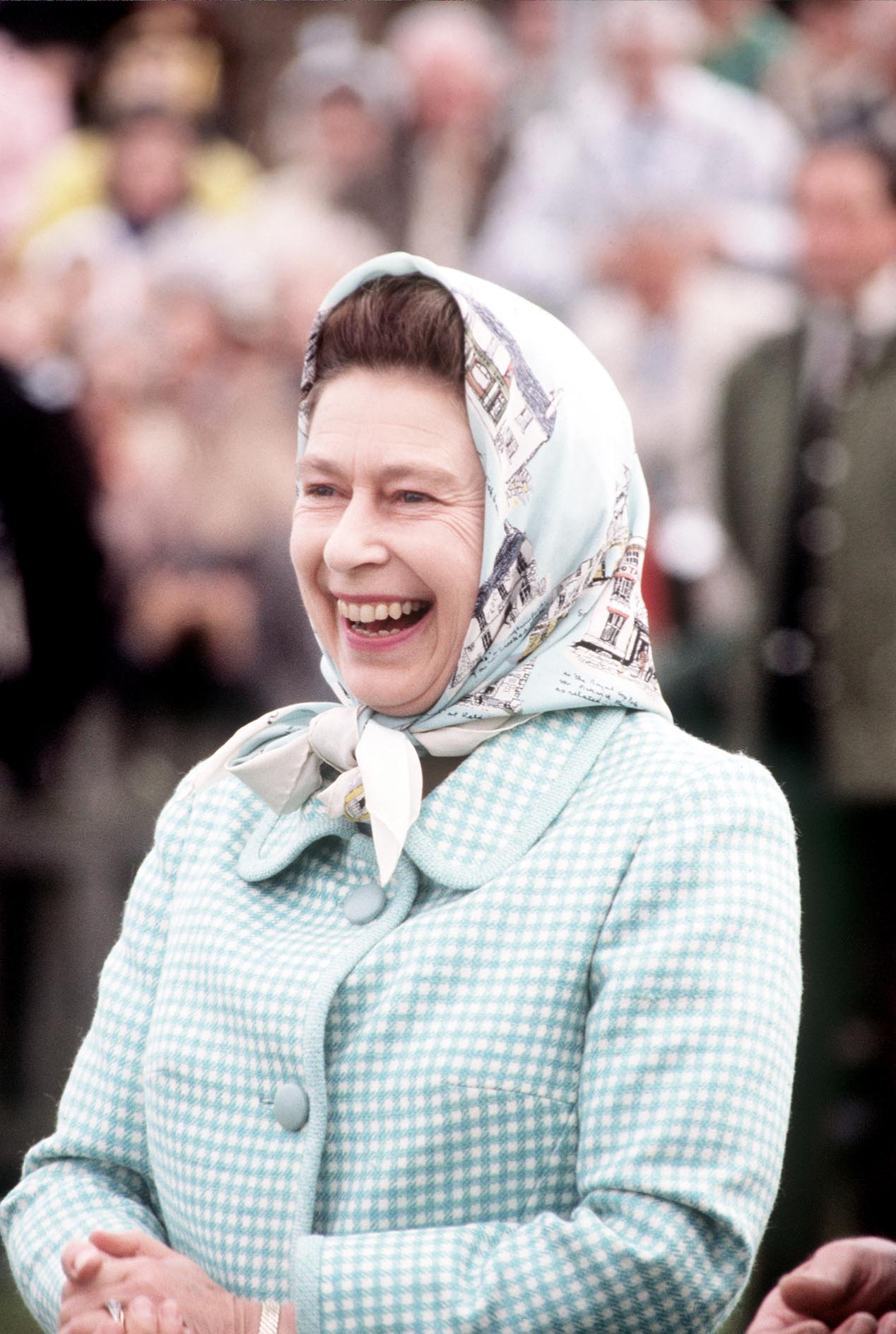 Hartnell’s success was matched by that of his contemporary, Hardy Amies, the Queen’s other key designer from the 1950s. For all their competitiveness, both were masters of their craft, avoiding the trap of creating something too overtly fashionable, which would quickly become dated. As Amies observed in her memoir, “Style is so much more satisfying than chic. The style has heart and respects the past; chic, on the other hand, is ruthless and lives entirely for the present.

The timeless quality of the Queen’s style was evident when her granddaughter, Princess Beatrice, married in July 2020 in an enchanting dress designed by Hartnell six decades before. (The Queen had worn it on various occasions, including the 1962 premiere Lawrence of Arabia.) It was altered for the Princess by the Queen’s current fashion designer, Stewart Parvin, who designed the emerald outfit Her Majesty wore in Ireland in 2011, and Angela Kelly, also a confidante and trusted friend.

It was the latter that kept the queen at the forefront of confident power-dressing in her 90s, emphasizing bold colors (including tangerine, lime and pink). raspberry), signature Launer handbags and matching hats. 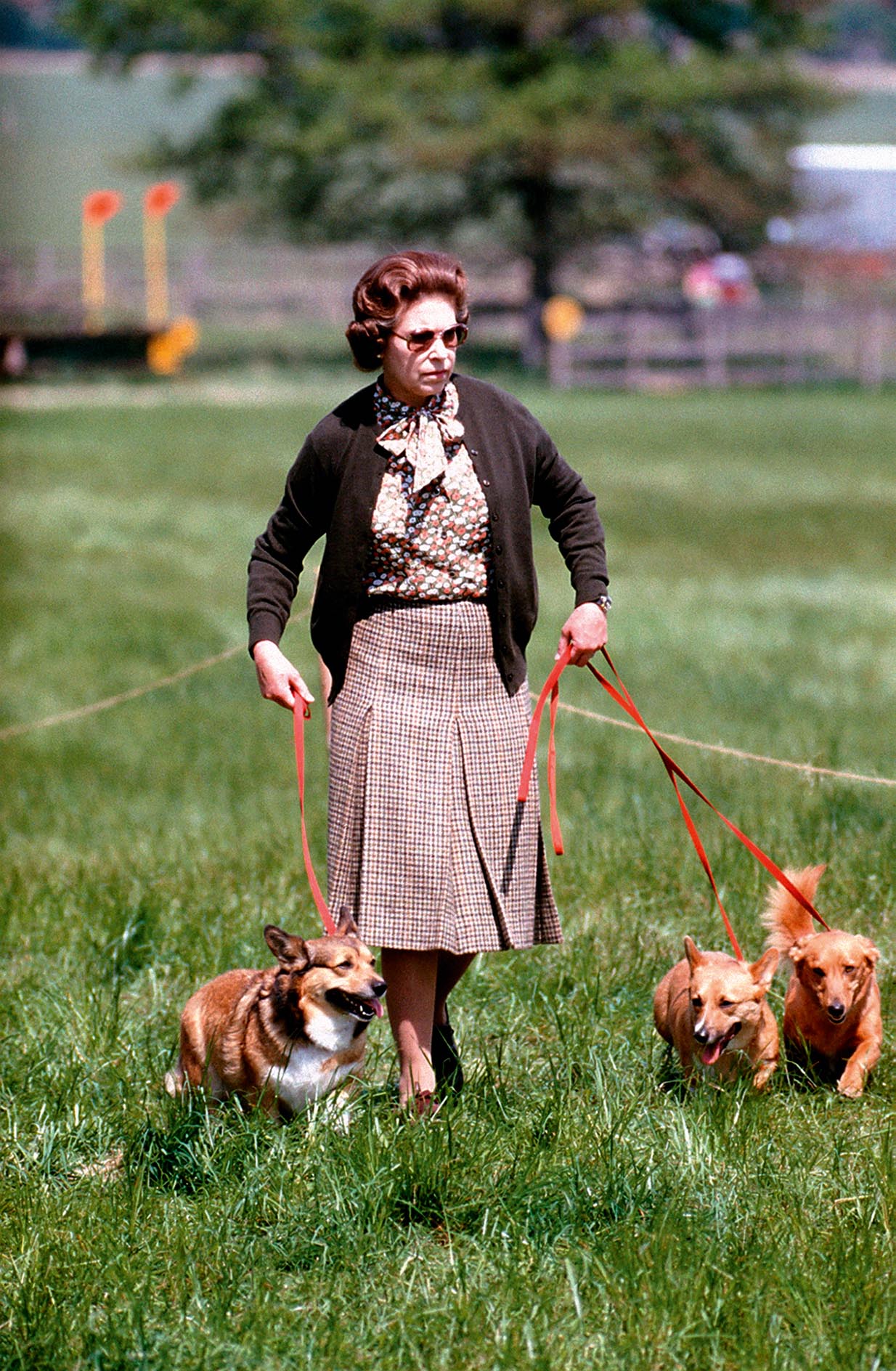 Queen Elizabeth II with some of her corgis walking the cross country course at the Windsor Equestrian Trials.

But to me, the queen’s authentic style is also evident in her more private self: the clothes she wears as a peasant woman, with her dogs and horses. Certainly those tweed and tartan skirts, sturdy shoes, riding jodhpurs and silk scarves have had as much influence on contemporary fashion designers – including Miuccia Prada – as the greatest ball gowns and Her Majesty’s dazzling tiaras. Therein lies another of the Queen’s accomplishments: proving that charisma doesn’t have to fade with age and that true beauty can be found in quiet dignity.

Justine Picardie is a fashion editor, biographer and novelist, and former editor-in-chief of Harper’s Bazaar.

Emma Hughes rounds up the best Platinum Jubilee street party recipes from some of Britain’s most beloved chefs and food writers.

Queen Elizabeth II of England at Balmoral Castle with one of her Corgis, September 28, 1952. Credit: Bettmann Archive / Getty

Her Majesty Queen Elizabeth II has been painted literally thousands of times since she ascended the throne. Charlotte Mullins

The most popular women’s clothing at Target 2022

The best workout clothes for women in 2022