Hot on the heels of releasing two new singles, the band were guests this week for Local Spins on WYCE, which also featured new tracks from Phabies, Mannhattan, Superfluiid, Michigan Rattlers and more.

Inspired by Seger and so many others: Paradise Outlaw on stage at Lowell. (Courtesy picture)

“That was probably my biggest inspiration as a musician for the blue-collar, hard-driving, singing-about-real-life kind of guy,” the Grand Rapids guitarist said. outlaw of paradise.

“He’s a guy from Michigan (who) did it all and he did it the real way. That’s kind of the mold I’d like to follow.

Langeland and the rest of the members of Paradise Outlaw – vocalist Colin Tobin, bassist John Johnson, drummer Nate Vredeveld and recent addition Alex Austin from Deerfield Race on guitar – immerse yourself in blue-collar roots with music that straddles southern rock, country and folk.

“We mix it all together for a kind of Americana sound,” Langeland suggested.

And after a 2020 steeped in the COVID pandemic, the band reemerged this year with new music and a handful of live appearances, including a Saturday night headlining show in Grand Rapids. Tip Top Deluxe Bar & Grill. Lisa Mackie and Ryan Gladding open the 9 p.m. show; tickets are $5 and available here.

For this week’s edition of Local Spins on WYCE, the band spotlighted their two most recent singles – “Don’t Make ‘Em Like They Use To” (a tribute to influential artists of the past) and “Forget ‘Em’. Scroll down for the songs, full interview and radio show podcast.

“We’re really happy to get back to it now,” said Langeland, the band’s lead songwriter. “Having the crowd reaction and sharing the music again. That’s kind of what it’s all about, kind of the end goal of all music is to play for people. 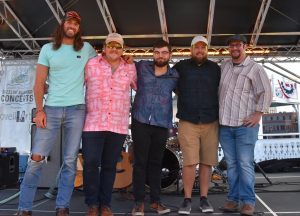 Other upcoming shows will include an October 9 date at the revived Skeletons, which celebrates its official grand reopening in Grand Rapids on September 10.

After playing their first gigs in a year last month, the band have “rolled back the rust and things look more or less like they were when we called it quits”.

They are also happy with the addition of Austin on guitar.

“We share a lot of common influences and our outlook as guitarists is very similar,” Langeland said. “So it’s a lot of fun playing with him and working on parts of songs.”

After recording the aforementioned singles at River City Studios in Grand Rapids in the spring, the band are “currently working on some new material” in hopes of possibly releasing the follow-up album to “Shadows” in 2019.

“We just tried to keep trying to keep trying,” Langeland said. “It would be nice to record another one this year maybe, but we don’t have a target date or timeline in mind at the moment.”

The August 6 episode of Local Spins on WYCE – which highlights local and regional music at 11 a.m. Friday the WYCE (88.1FM) and online at wyce.org – also featured new music from Phabies, Michigan Rattlers, Mannhattan, Superfluiid, The Last Straw Motel, The American Hotel System and Laura Rain and the Caesars, as well as pieces of Black Rose by Serita, hiker and Bob Seger (choice of the day of the musician from Langeland). Listen to the podcast here.