“I saw her walking down the aisle… I couldn’t hold it back, the tears were rolling down”

Special for the Birmingham Times

“You Had Me at Hello” highlights married couples and the love that unites them. If you would like to be considered for a future “Hello” column, or know someone, please send applications to Barnett Wright [email protected] Include the couple’s name, contact number(s) and what makes their romance unique. 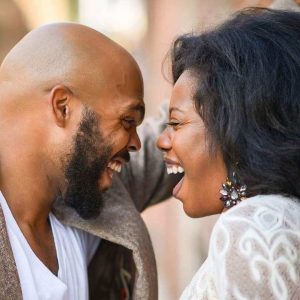 Married: September 19, 2015
Meet: October 2005, in a nightclub in Birmingham, Kimberly loses interest because “he was too handsome”, she says. They did not exchange contact details at the time, however, they met again in October 2008, at the American Legion nightclub in Fairfield, after being spotted by Kimberly’s late best friend Sherri.

“Sherri saw him first and said, ‘There’s your boyfriend,’ and I said I wasn’t thinking about [him]and she said, ‘well, he is [thinking about you]’… [Later that night] Christopher wrote down his number and gave it to Sherri to pass on; [she] convinced me to call him and give him a chance because he was still trying to reach me three years later, so I ended up calling him the next day,” Kimberly said.

“When I picked up [the phone] and it was her on the other end, it was unexpected,” Christopher said. “We talked about our [daughters, who were both 1 at the time, and Kimberly’s oldest daughter who was 12 at the time]and I realized that we had a lot in common and that we knew the same people, but that we had never crossed paths.

“And then he asked me what I was doing later that night, and said he had to work that night but he’d like to take me out to dinner, and I said, ‘I like eat, so that’s cool,'” Kimberly recalled.

First date: Tonight at O’Charley’s on Lakeshore Drive. “I ordered the salmon and he said ‘let me try that.’ He had ordered chicken fingers and fries but changed his order to mine and ended up liking something new,” Kimberly said.

Round: After their first date, they became inseparable, and in December 2008 they were a couple and started dating during their first vacation together. Kimberly and Christopher share a story of her first encounter with her grandmother that could have changed the course of their lives.

When Christopher met Kimberly’s grandmother, they bonded over graduating from A.H. Parker High School, and she quickly noticed the familiarity on his face.

“She looked at me and asked what my grandfather’s name was, and I said ‘Thomas Stephenson,’ and then he told me he was trying to woo her in high school,” Christopher recalled .

Proposal: March 28, 2015, in Atlanta, Georgia at Applebee’s. Christopher enlisted the help of their daughters, Marley [Kimberly’s daughter]and Taylor [Christopher’s daughter]who were both seven years old at the time.

“Marley wrote ‘Mommy Will You’ and Taylor wrote ‘Marry My Daddy?’ on a few sheets of paper and handed it to Kimberly at the restaurant table… I looked at Kim and said, ‘What’s your answer?’ And she said, ‘Are you for real?’, and I said ‘yes,'” Christopher said.

“I didn’t know if he was real because he didn’t have a ring because he and the girls had just planned this while we were there in Georgia so I couldn’t tell if it was real or not,” Kimberly mentioned. “But after he said he was serious, I said, ‘Well, yeah, I’m going to marry you!'” she laughed.

Kimberly was still in disbelief. “When we got back to the hotel, I asked if he was serious again, because if he was, I told him that we were about to start telling people, and he said, ‘tell them’!” So we recorded a video of the girls announcing the engagement that we sent out to people,” Kimberly said.

The wedding: Agape Ministries in Fairfield, officiated by Dr. Calvin Moore Jr. Their colors were purple and champagne with silver accents.

Most memorable for the bride” danced at the reception and Christopher sang for me under the Vulcan statue [at the Vulcan Park & Museum Birmingham in Homewood]. He had the mic, and his band [Yarbrough and Clark] was playing while he sang ‘Happy Feelings’ by Frankie Beverly. It was a surprise and a beautiful moment because my family had never heard him sing and I was so happy,” Kimberly said.

Most memorable for the groom” was standing at the pulpit waiting for them to open the doors so I could see Kimberly and watch her walk down the aisle to me. I had already started to be emotional when I saw Taylor and Marley walking down the aisle, and when I saw Kimberly, I couldn’t hold it back, the tears were rolling down,” Christopher said.

The couple honeymooned at two destinations: a resort in Biloxi, Mississippi, and a hotel in Huntsville for the Alabama A&M Homecoming. “We spent a few days and celebrated with our friends in Huntsville,” Kimberly said.

words of wisdom“As the days pass, reflect on what got you to where you are, and keep believing in the innocence of the love you had all along. [Be] all throttle, no breaks,” Christopher said.

“Make sure you all have a friendship because that’s the person you’re going to spend the rest of your life with. But remember you’re individuals with different goals, so encourage each other. and stay friends,” Kimberly said. Happy forever: The Clarks are a blended family with three daughters: Kyra, 26, Taylor, 14, and Marley, 14.

Kimberly, 43, is a Wenonah/Fairfield native, graduated from Fairfield High School, and is currently pursuing a bachelor’s degree in business management at Alabama Agricultural & Mechanical University. She is an educator for Alabama Extensions for the Jefferson County area and owner/founder of the men’s professional basketball team, the Magic City Surge.

Christopher, 42, is from East Thomas, graduated from AH Parker High School, and attended Alabama Agricultural & Mechanical University and Miles College where he studied secondary education. He is a full-time musician and [horn musician] for two bands, Yarbrough and Clark, and Fly Dave and the Party Rockers GoGo Band. Christopher is also a member of the professional music fraternity, Phi Mu Alpha Sinfonia Fraternity Inc.